A special thanks to Ana Rodríguez, Alejandro Cevallos, Pedro Cagigal, Beto Noboa, Al Borde (Pascual, Esteban, Malú y Helena), and to all those who have made this project a reality and have collaborated in the construction process of La Pícara Juana. 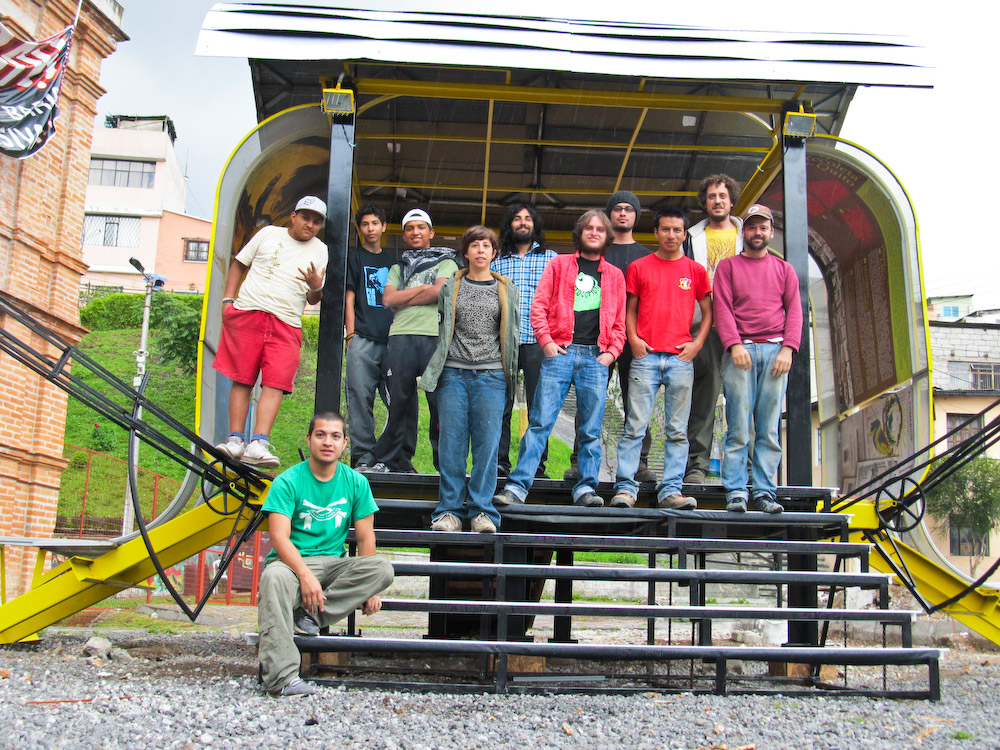 From April 20 to May 5 we worked on the O.B.N.I. – Ocupación Barrial No Invasiva (Non-Invasive Neighbourhood Squat, a pun with the Spanish acronym for UFO) workshop, which proposed an intervention in the back lot of the Quito Centre for Contemporary Art – CAC, renamed by neighbourhood residents and participants as La Pícara Juana (Crafty Juana), initiating a process of transformation of the public space around CAC to benefit the residents of the neighbourhood of San Juan.

The workshop involved carrying out a process already initiated by CAC together with the neighbourhood, moving past the analysis and reflection stages to a process of incorporating the residents’ wishes and needs into the creation and furbishing of a space. This is an important step towards social empowerment, collective action and neighbourhood occupation of derelict spaces.

La Pícara Juana aims to be a space that meets the needs of residents living in San Juan and Quito in general, a place for social gatherings, recreation and self-governance. After being closed off to the public for so many years, it will become a place for creating cultural alternatives that strengthen the social fabric of the neighbourhood while building new relationships among associations. 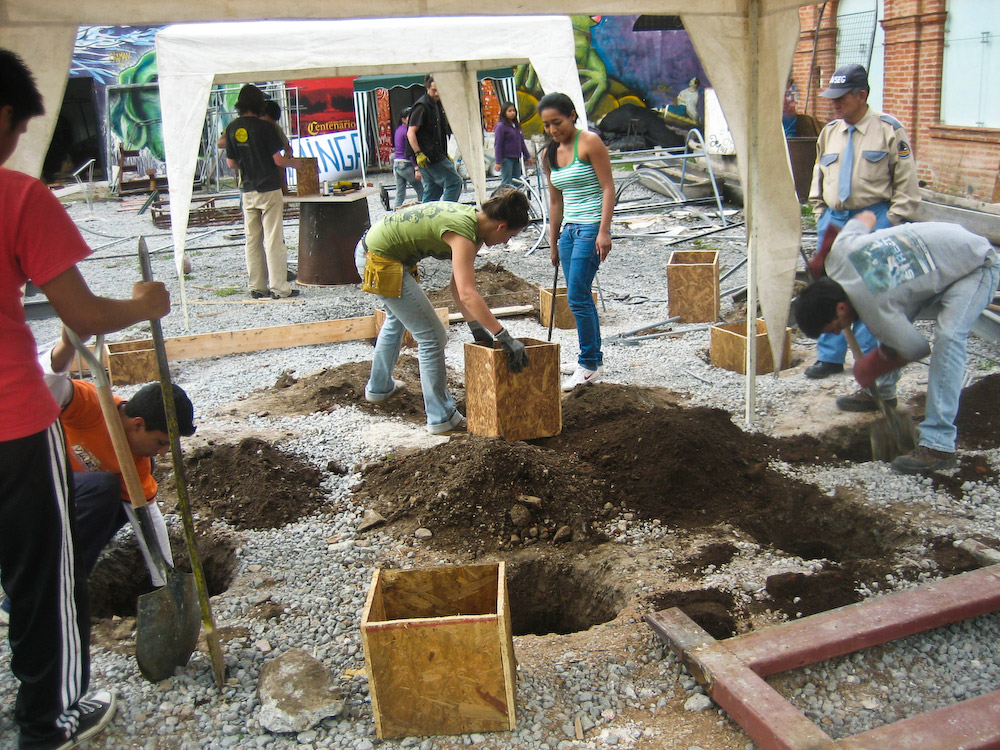 During the development of the workshop, participants worked intensively to imagine new uses for a space that would transform the wishes and needs of the neighbourhood into reality. They proposed new horizons by experimenting with materials from the Interactive Museum of the City (MIC), as well as top-quality materials left over from the exhibit ‘The Quito Revolution’, which were just sitting in the CAC’s warehouses.

La Pícara Juana is fundamentally a place for the development of four types of furnishings that convert the space into a multifunctional and multipurpose venue. Part of the activities will be linked to a covered space constructed for the development of social and cultural activities (from meetings and assemblies to concerts, exhibitions and open-air film series). A greenhouse has also been planned for the community garden, which will be tended based on self-organisation and distribution of work among the neighbourhood residents, taking guidance from training courses at CONQUITO, the Metropolitan Agency for Economic Development. Another proposal has been to implement a space for parkour training and practice because there are so few spaces designated for this sport in the city. There was also a proposal to furnish the rest of this space with urban outdoor furnishings, creating lounging areas for gathering and connecting with others in the plaza of La Pícara Juana

You can check the project report here:

And life in Pícaja Juana continues …

We will share the news that comes to us. Courage and great strength to all the neighbors and residents of the neighborhood of San Juan that with effort and tenacity are recovering the lost space.

11/6/2012
The parkour training circuit is almost ready, pictures of the process by Quito Être Fort.

7/4/2013
Work on the collective garden begins to bear fruit. ¡Mujeres Emprendedoras ahead! 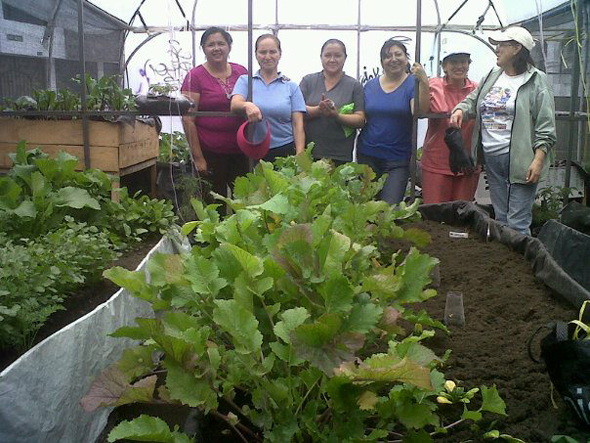 20/6/2013
“Greetings from the Pícara Juana in Quito-Ecuador. We want to share with this email the project and the space that, at your initiative, made the community appropriate this space. We counted on the participation of the group of Mujeres Emprendedoras, the group of adults over sixty-something, the parkour collective. Thank you, the seed that you sowed germinated. With appreciation, Ruth Gallegos – Coordinator of the Group of Women Entrepreneurs.” 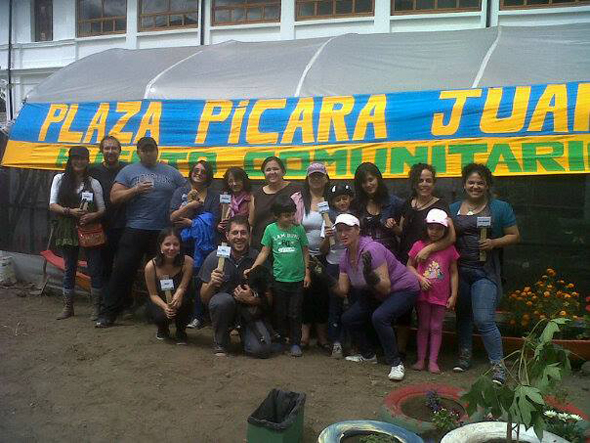 28/6/2013
The Urban Garden LA PICARA JUANA has just received the INNOVATIVE GARDEN Award of the URBAN AGRICULTURE PROJECT 2013 of Conquito. 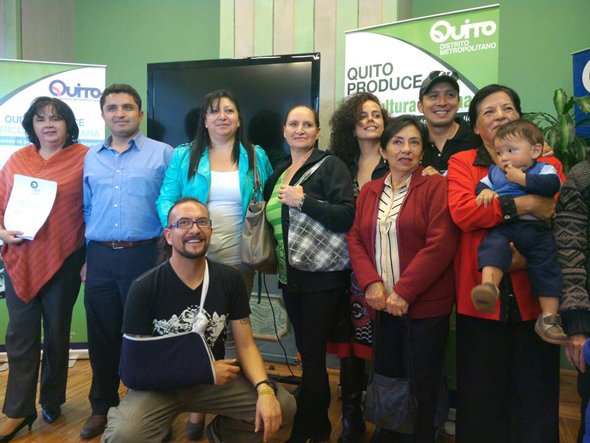 23/11/2014
It has been some time since we received the last signals from La Pícara, but we are very happy to see that life is recovering its space. We share some moments from the last maintenance minga of La Pícara Juana, now renamed the ‘Jardín de San Juan’:

Urban Furniture Workshop for the San Juan Garden “The purpose of the workshop was to jointly define, with those who inhabit and frequent the San Juan Garden, the needs and expectations of the space, to collectively build and implement the furniture to be used by people that make and bring space to life.” 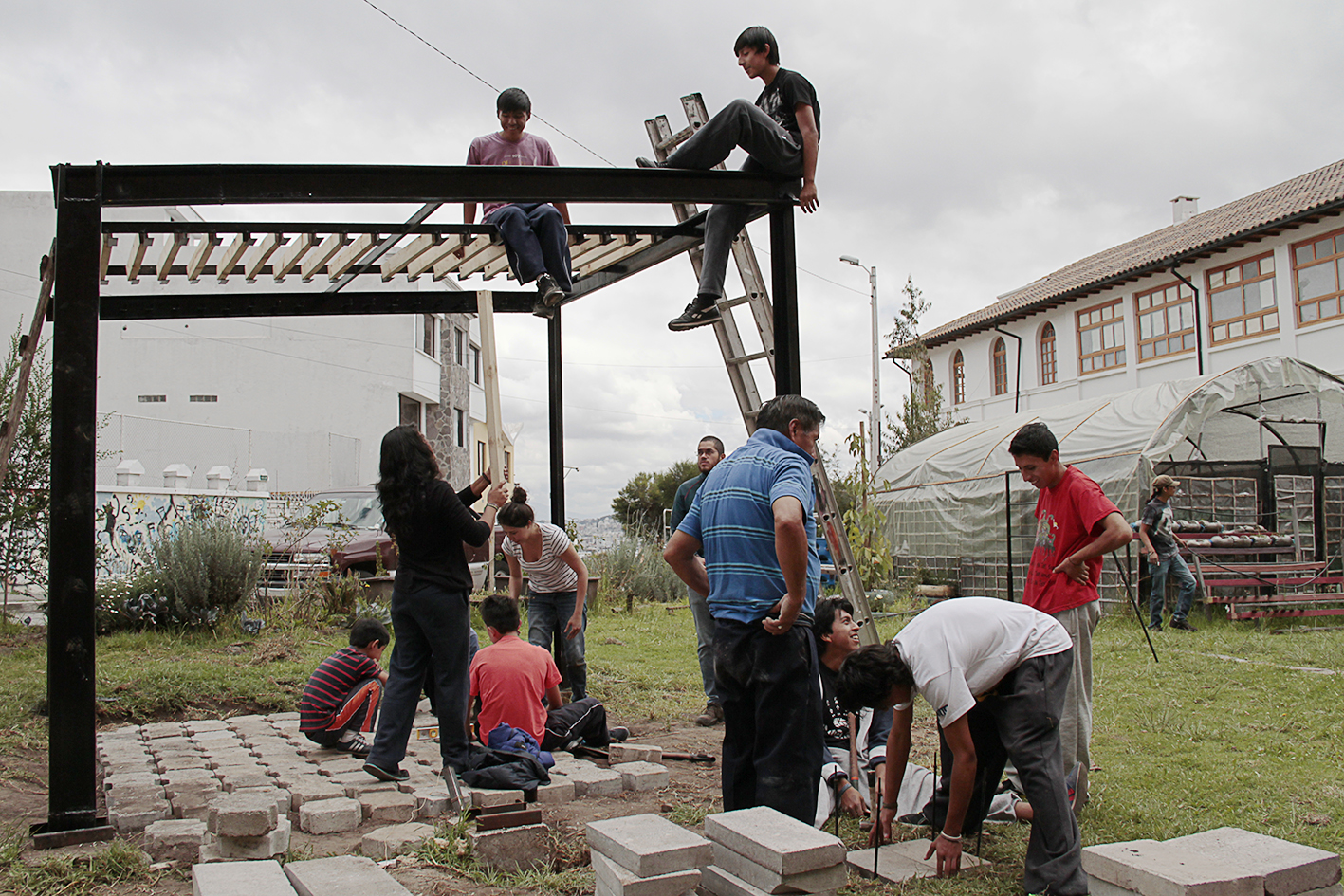 The OBNI has been transformed and the square continues to transform itself! That’s the attitude! Remodeling of the covered space through dynamics of collective construction and use of materials from the metal structures of the first version we built. Long live La Pícara Juana!

Report of the project